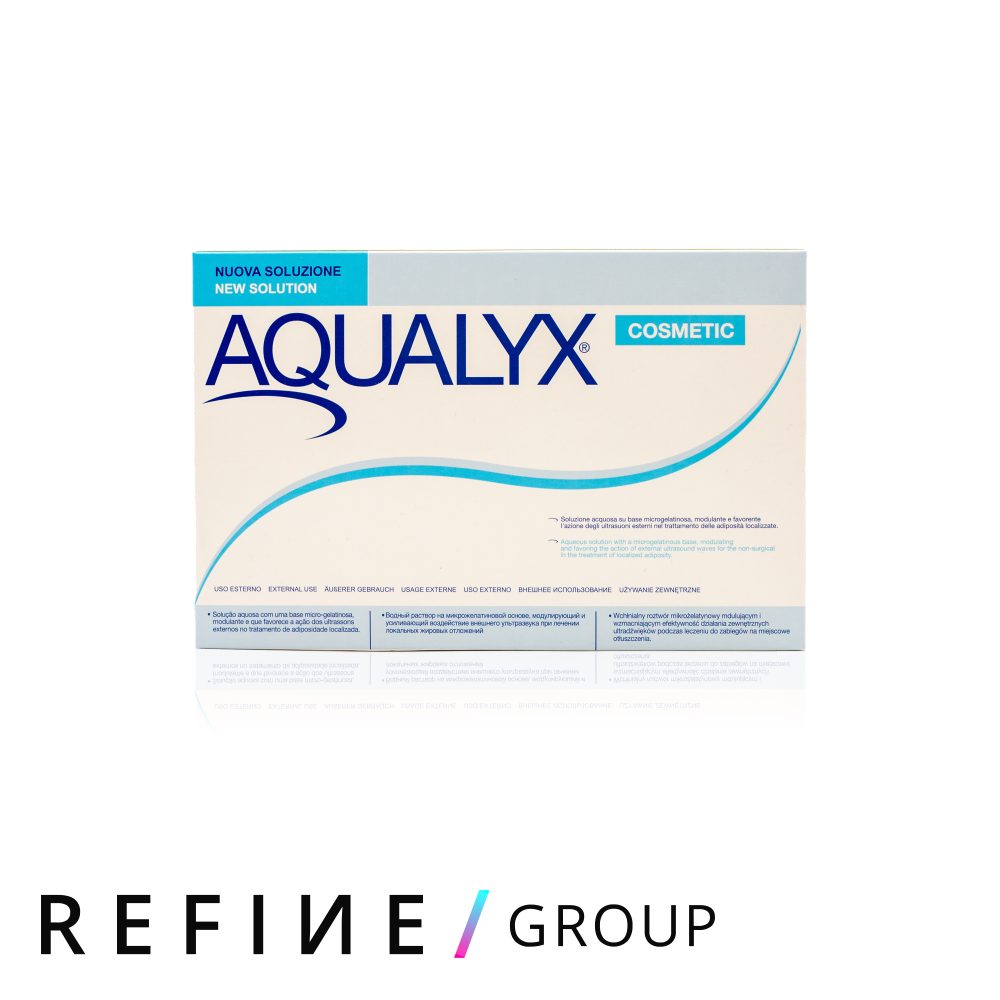 10 Vials – Dissolve cellulite with Aqualyx biodegradable gel.TOPICAL USE ONLY

AQUALYX is an aqueous compound solution, with slow-release sugar that reduces the biological half-life of the solution, minimising side effects.

The buffer system within AQUALYX ensures that the 12alfa-dihydroxy-5beta-24oico cholanic acid sodium salt is delivered to the target area.

Deoxycholic acid has been used in various fields of human medicine since its discovery. Present also in the human body, deoxycholic acid is used in the emulsification of fats for the absorption in the intestine.

The solution is injected into the treatment area whereby the 12alfa-dihydroxy-5beta-24-oico cholanic acid sodium salt of AQUALYX alters the surface tension of the fat cell membrane and increases the permeability of the membrane. An ultrasound device is then applied over the surface of the skin in the targeted area and this causes the movement of liquids both inside and outside the fat cells. The fat cells start to balloon and break up, leading to the drainage of micro droplets of fatty liquid into the body, which is then metabolised through the lymphatic system and excreted.

One AQUALYX treatment typically consists of two injection sites. A local anaesthetic, lidocaine, will usually be administered before the treatment commences. The practitioner may prefer however to add the lidocaine anaesthetic to the AQUALYX solution so that the two are injected together. Either method should minimise discomfort during the procedure.

The practitioner will use an ultrasound device in conjunction with the AQUALYX injections to assist in the dissipation of the fat cells.

Aqualyx is a revolutionary solution to lose weight in a tried and tested way. Aqualysis, the method of using the aqueous gel to remove excess fat, utilises a non surgical method to target fat cells to destroy them permanently. Aqualyx is completely biodegradable and biocompatible, using a slow-release sugar based system, to dissolve cellulite at the site of injection before it’s passed along the body through the lymphatic and excretory system. What do I receive in the box? 10 x 8 ml vials of Aqualyx. What are the Benefits of Aqualyx? Aqualyx is recommended for: Removing stubborn fat when exercise and diet cannot, Eliminating cellulite and fatty deposits, Treat pseudo-gynocomastia in men, Suitable for all the following parts of the body: thighs, knees, buttocks, hips, back, stomach, chin, saddlebags. How is treatment carried out? Only medical professionals that have received specialist training in administering Aqualyx, should treat patients with this product. Injections are usually repeated every 3 – 4 weeks and typically 2 injections at each spot during each treatment.

The time taken for a treatment session will depend upon the size of the area and indication being treated.

Treatment can take between 30 – 60 minutes per treatment and you will typically require 2 – 8 treatments, 4 weeks apart. Some people may see significant results after 1 or 2 sessions.

Duration: The results of an AQUALYX treatment are permanent under the condition of maintaining a constant weight measurement (i.e. assuming you don’t gain weight). Once the freed fatty acids have been processed through the body’s lymphatic system, they don’t reappear.

However, the procedure is only permanent if you follow a healthy diet and exercise frequently following treatment. If you regain weight, it is likely that the fat pockets will reappear. If a healthy lifestyle is maintained, the results should be permanent.

Possible side effects: People treated with AQUALYX will typically experience minimal side effects when compared to more invasive procedures, such as liposuction.

Side effects include some redness, swelling and tenderness in the treated area.

Some people may experience some slight bruising, but this and any other side effects will usually resolve within a few days. You may need to take over the counter painkillers to control any pain-related side effects.

The manufacturers report that to date no major side effects of AQUALYX use have been reported to them.

Do not use: As long as you are generally healthy and don’t have any skin diseases or infections in the area treated, there are few medical reasons why you should not undergo this treatment.

Refine are here to provide your cosmetic products and keep you stocked up. Selling some of the best brands known in the industry, you can trust us to provide a reliable and convenient service.

Hit enter to search or ESC to close